. . . unless you are 5 years old and the parade has lasted more than 15 minutes.
So I thought I would go on a research mission to see the 4th of July parade in Oceanside. I did this because I am the Chair of the 2011 Poway Parade. Our theme is Honoring Those Who Serve and therefore I thought going to see a 4th of July parade would give me some great ideas.

The Id and I packed up the life-sized banana and went to Oceanside. The parade had some fun ideas and floats and I was glad I went. The Id, on the other hand . . . well, here’s what I learned:
1) Take a porta-potty and snacks. Duh, you would think I hadn’t been doing this mom thing for 9 years. What mother leaves the house without snacks?! That cost me $9 at the corner gas station. And as for the porta potty – the Id can hold it like a camel if she wants to, but the moment she’s bored it’s an emergency. In an hour and ½ we visited the bathroom 3 times. And, it was a pay bathroom – 25 cents each time. I’m takin’ that 75 cents out of her allowance.
2) Don’t run down the street after a float trying to take a picture of it. You will look like an ass. Because of the aforementioned potty breaks, I missed the one float that I wante 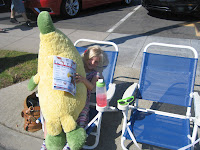 d to see!
3) A life-sized stuffed banana makes a great pillow for a five year old who has had her fill of the parade. I know parents were judging me when my child sprawled herself out in the middle of the sidewalk, but that’s nothing new for me. We looked much more ridiculous walking down the street with that thing!
Priceless Quote: “I’m gonna fart mommy”. the Id apparently found her sister’s whoopee cushion and entertained herself (and me) for a good 10 minutes with that thing. Our fun ended when mommy popped the cushion. the Id insisted that I sit on it and every time I did it wouldn't "fart". So, I jumped higher and apparently it just couldn't take all the pressure. The way that thing popped, it looked like something straight out of a cartoon with all the jagged edges. That’s a way to make you feel fat! Oooops, I think the cushions were only intended for people under 30 pounds. The Id actually cried and hugged the cushion when I popped it. Who knew?!
Posted by Recovering Working Mom at 10:27 PM