Every mommy knows that when you are pregnant with that first little peanut you have delusions about how your child will act, how you will dress them cutsie and how they will be perfect little angels.  After 9 years and three of the craziest, funniest, loveyest (yes, I made that up), kids, I now know that “perfection” means you take it day by day and most of the time you just  go with it; if you can laugh about it and document it to torture your kids later, all the better!  Which brings me to today’s family fun.  Let’s start with a riddle . . . What do you get when you put Tinkerbell, Tangled and Scooby Doo together?  Yep, that’s right . . . Reese’s birthday party!
Here’s what I learned about giving a 4 year old too many choices and not having the energy to put your foot down:
1)      When your child finds out that her “crush” (we’ll call him “Joey” so that mommy doesn’t out his true identity) can’t go to her birthday party because it’s at a beauty salon and you’re pretty sure neither “Joey” nor his mommy would want him to have glitter and roses put in his hair, or his nails done, she will throw an absolute sh*tfit and refuse to go to her own birthday party.  This tantrum will be so bad that you will have to drive her @&$ over to the salon and show her the birthday room just so you don’t lose your deposit!  So, since I was feeling guilty about having a party that “Joey” couldn’t attend, we move on to #2 –
2)      Even though your child will have chosen a Tinkerbell theme and she seems to be ok with the location of her party, she will torture you by then selecting, not the Tinkerbell cake, but the Tangled cake.   And then, to further make her point, she will select a Scooby Doo candle and a Scooby Doo party favor because she wanted a Scooby Doo party with “Joey” at Pump It Up, Damnit!  I added the “Damnit” for effect.  She hasn’t yet used that word, but it’s only a matter of time. 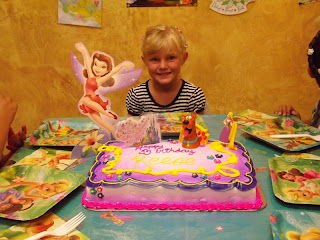 3)      It never fails, if you put 10 girls in a hair salon with nail polish, some blacklights, some sand art, a fashion show and a big ole chocolate cake, they will forget that “Joey” ever existed.  Those girls had an absolute ball!  “Joey”, eat your heart out!  J 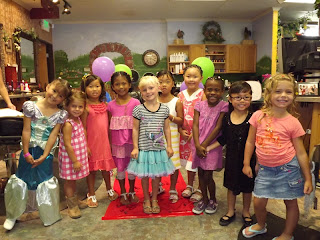 Tonight I have a P.S. that happened late in the evening and the purpose is to answer the “what’s a carpeticure” question.  So Id (the baby) was being a little sneaky as she was heading into her bed tonight.  She kept rubbing her feet on top of each other and I couldn’t figure out what she was doing.  Then, I looked in her hand and she had a half open bottle of bright blue nail polish and apparently she was trying to rub it off the carpet with her feet because she had just given the carpet a pedicure.  Two things I learned about this little adventure.
1)      After your child has done something of this nature, she will feel so guilty that all you have to do is look her in the eye and calmly say “go to bed” and she will put herself to sleep before grandma can say “goodnight”!
2)      All the You Tube and internet recommendations about using acetone to get nail polish out of carpet are bullsh*t.  I tried that for about 20 minutes and all it did was made it a lighter shade of blue.  So, I did what any 5 year old would do . . . I grabbed a pair of scissors and I cut off the tips of the carpet strands where it had spilled.  Good as new.  And, by the way, if my husband reads this one, Grandma gave me permission – she said not to cut too much off in any one area, but she did say it would be fine.  So, that was explicit permission.
And finally, I give up, I’m going to put plastic all over the house, wrap the kids in bubble wrap, and call it a day!
Posted by Recovering Working Mom at 12:15 AM