Driest winter since the Donner Party!

Now I know why it is that people might actually eat each other even if they don’t get snowed in.  As you know from all my b*tching, we trekked all the way up to Lake Tahoe for a white Christmas, and got anything but.  The Donner Party is the ill-fated group of emigrants travelling near Lake Tahoe in the 1840's who got stuck in a snow storm and turned to cannibalism to survive.  Apparently it has been more than 125 years since Lake Tahoe has had a December that is this dry.  We’ve got the opposite problem the Donners had with the weather, but we’re about to go so crazy that we just might kill and eat each other.
Here’s what we learned about becoming desperate in your quest to entertain the children with alternative winterish activities:
1)      Your children’s boredom may get so bad that as you are driving to lunch one day your seven year-old might say to you “I guess I’ll just twiddle my thumbs then”.
2)      When you are bowling during family time, you MAY discover that the only strike you get is while you are on the phone with your sister.  I absolutely sucked until I got on the phone.  Had it not been for that phone call, I would have lost TO THE BABY!
3)      When deciding to go to a movie, you may want to reconsider whether taking 5 children (yours plus two additional cousins) is a good idea.  We had 5 kids, 4 hours, 3 popcorn/candy kid packs, 2 mid-movie bathroom breaks and 1 Muppet Movie that we will never forget.  I was re-thinking bringing the 3 year-old cousin when 20 minutes in she started crawling on the floor of the theater trying to entertain herself!  She didn’t fuss and she did entertain herself the entire time, so we called that a success!
4)      It may be a sign that you are skiing on sh*tty man-made snow when on the first run of the day your seven year-old says “can we stop for hot chocolate?”  I have never experienced anything like this where literally the only snow on the mountain is that which was man-made the night before, or which comes off your skis on the chair lift.    Husband from Heaven almost got away with skiing in shorts!!!
5)      When you are the only adult who is dumb enough to take 4 children out on the ice for ice skating, you will fall on your @&$.  Why is it that when there is an ice skating rink within 10 miles and it’s winter we feel obligated to go skate?!  This is the most f*&#ing ridiculous thing.  We put children on tiny blades and then tell them to go and glide across frozen water (and in our case, it was melting fast because it was 65 degrees outside!!!!)  Those poor kids, (with the exception of the Ego (the middle child) who did fantastic) spent the entire time hugging the wall and praying for the moment they could get off the ice and get some frozen yogurt.  Was I a bad mother when I told them to quit their whining and get back out there for at least 3 more circles around the ice?!  I paid $10 for each pair of skates and we were going to get our money’s worth.  Plus, I had 6 hours to fill! 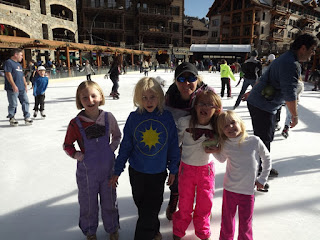 We’ve decided to leave our non-Winter Wonderland a day early, so we’ll be bringing in 2012 in the car on the way home.  Since it is New Year’s Eve, I should say that I refuse to make a New Year’s Resolution because I know I’ll break it by 12:05am.  Instead, here’s what I will strive for in 2012 – I shall find the humor in every scenario possible and appreciate each day I have to torture, I mean be tortured by, I mean be with my children and create fantastic memories that will last a lifetime!  Toast to the important things tonight and most importantly GET A BABYSITTER!  ;-)
Posted by Recovering Working Mom at 2:56 PM