Saturday night mommy went back to old school family fun.  You know, where mommy reads something really cute in the Disney Family Fun magazine and decides she’s going to try it.  I know, it’s been so long since you’ve seen that so you don’t recognize it.  Well my friends, it’s back and we’re gonna do our best to implement a few Disney Family Fun activities over the next several days.
Saturday night I had the ideal situation – the baby was going to be with daddy at a car show, oldest child weaseled her way into a sleepover, and all I had to do to get a night to myself was pawn #2 off on someone.  Or, I would have even settled for someone coming over to our house.  That would have meant that I wasn’t the entertainment for the night.   And wouldn’t you know it, this was the one night when EVERY ONE of #2’s friends were busy.  Even the old standby, BFF Molly, didn’t come through.  Some B.S. about 2 soccer games and a swim party.  I guess I’m the only terrible mother who will take any shot she can at sending her kids to someone else’s house for the night.  I don’t care if they’re cranky at someone else’s house, they’re not at mine!  J  BFF Molly’s definitely going to beat me for Mother of the Year, isn’t she?!
Even though she kept holding out hope that one of her friends would reply with a “yes”  the Ego (#2) and I made the most of it and here’s what we learned about a girls night when daddy and the sisters are away:
1)      We can do whatever we want, including eat our dinner in front of the TV on the couch!  That was about as rebellious as it got, but it sure felt good, and it’s our little secret.  Ok, maybe not anymore, but she’ll never know I told anyone . . . well, not until she can figure out how to access my blog and read it.  Maybe by then I’ll have removed the cuss words.
2)       When you plan an activity that involves “sandwich cookies”, melted candy disks, and gummy leaves, be sure that you don’t cheap out on the ingredients.  Mommy thought it would be a great idea to purchase the items that we needed at the 99 cent store.  After all, how different can sandwich cookies and some gummy candies be?!  Well, let’s just say that there’s a reason you pay $3.29 for Oreos, and the “Giros” were only 99 cents.  Below are two photos . . . which one do you think is the one from the Disney Family Fun magazine, and which one is the Mommy /Ego version (by the way, I spent the better part of 45 minutes trying to get the photos to turn out the right way, and they would not - so, you're getting sideways photos)?!  It looks like a bloody mess exploded all over my kitchen.  We were supposed to make 22 of those.  After 4 I gave up and decided there was one for each of the girls and daddy, and that was enough.  You’ll notice there aren’t even sticks in the bottom of ours.  Every time we tried to put it in the cookie, the cookie would break.  The Ego loved it that they kept breaking because that meant she got to eat them. 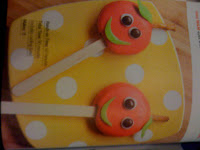 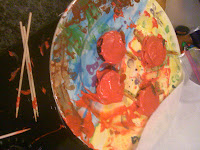 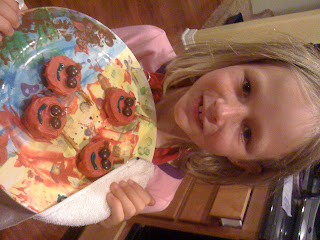 3)      And finally, I learned you should always have more than one child – three’s excessive, but more than one is a must.  Tonight I was the entertainment for #2, and I never realized just how much those girls entertain each other.  It’s exhausting being the ONLY entertainment for a child.  But, I did have the privilege of enjoying Hoodwinked Too – TWICE.  Good mother/daughter bonding.
Moral for today . . . “simple” projects ALWAYS look and sound simpler in a magazine where professionals actually create the projects, not real people.  They really should put “don’t try this at home” labels on these things.  But, if you are going to brave trying the project, spend the extra $2.50 and buy the quality ingredients.  You may even want to splurge and buy Double Stuffed just to make sure you have room for the stick at the bottom.
Posted by Recovering Working Mom at 9:23 PM

Email ThisBlogThis!Share to TwitterShare to FacebookShare to Pinterest
Labels: apple pops and Hoodwinked Too