Your very own pumpkin patch for Little People

So today I learned that Martha Stewart not only served time for insider trading, she also made her child wrap her own Christmas presents.  Alexis Stewart’s new book just came out and apparently she’s airing all her mother’s dirty little secrets.   Here’s what occurred to me - are you f***ing kidding me?!  The queen of all things domestic could not even be bothered to actually wrap her ONLY child’s Christmas presents?!  And then it dawned on me . . . some may think this is fraudulent – to create your entire persona around being domestic, crafty and always put together – when in reality, you’re so overcommitted you can’t even wrap your own kids’ presents.  To me, this woman is brilliant!  She created an entire empire that portrays her as the picture of perfect domesticity, and yet, she’s just like the rest of us with not enough hours in the day to get everything done (though I have to say that making your child wrap their own Christmas presents is a bit over the top).
Here’s what also occurred to me.  I'd better pull my kids out of school and home school them so that they unlearn all their reading and writing skills and can’t ever write a book that will reveal all my dirty little secrets.  My girls would hold nothing back!  That’s why I have to reveal it to all of you first, before they can get to it.
OK, back to the pumpkin patch and today's family fun.  This was a project from Disney Family Fun and it was a miniature pumpkin patch made of Circus Peanuts.  Following is what I learned about making your very own pumpkin patch for Little People:
No, not my little people, the actual Little People! 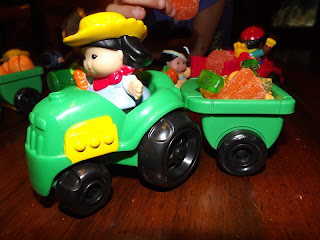 First, I’ll share with you the recipe and then how things turned out for us.  The entire project took 45 minutes.
Ingredients –
Circus Peanuts
Gummy Bears
Little People Play set
Cut the Circus Peanuts in half 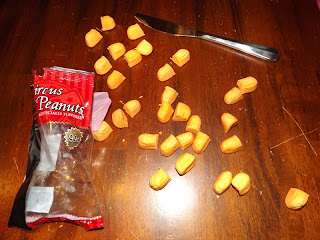 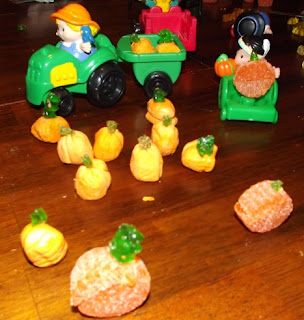 If you are feeling that you would like to make “big daddy” pumpkins, take some sugar orange slices, cut them until they are level, smash them together and voila!  Gotta give credit to the Superego (the oldest) for coming up with this one. 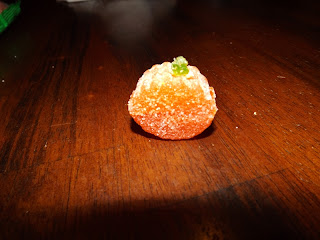 Here’s what Disney’s not going to tell you about the circus peanut pumpkins:
1)      Even though the Circus Peanuts taste like gummed up shoe leather, your middle child will eat them as she’s making her pumpkins simply because they have sugar in them.  She will even admit that they taste disgusting as she’s trying to pick them out of her retainer because she ate one while you weren’t looking.
2) The photos are very deceiving - these things practically fell apart and didn't stick together very well.  We did deviate from the Disney suggestions a little in that we used gummy bears instead of spice drops, but I don't think that would have made a difference.  Oh, and gummy bears do not pull apart easily; they are a sticky, gooey, disgusting mess when you try to decapitate them.
3)      The baby will not understand the “roll into a ball” part of the instructions, and the pumpkin peanuts will just end up looking like a broken in half peanut with a decapitated gummy bear (see the "pumpkins in the back of the picture above for example).  Oh, and just for giggles, she will ensure that the gummy bear’s @$& is hanging in the air!
Recommendation for today – if you’re looking for a quick and fun thing to do with the kids that they can use for a special treat for friends, buy the orange slices and some gummy bears, and make that version of the pumpkins.  The circus peanuts are just gross and not worth all the stickiness! 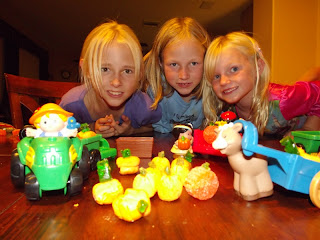