. . . I’d love to say “April Fools”, but no, that was the first thing I saw in an e-mail from my husband this morning.  I had taken the Trifecta to L.A. for the weekend so that Husband from Heaven had 30 hours of uninterrupted time to finish some house projects.  Well, the joke was on us. Most of the jobs took three times as long as anticipated, and the kicker was coming home to this . . .

And yes, by the way, before we put an offer on this house, we did watch “The Money Pit”.  We still were not dissuaded and we are now the April fools . . . I mean . . . Despite yet another crazy tale about our house, on this April Fools Day we did still take out time to mess with each other . . . well, primarily it was mommy messing with daddy and the girls, but I gotta give the baby credit, she did try to pull her own trick!
Here’s what I learned from playing tricks and how L.A. messes with everyone, all the time:

1)      When you visit The Grove shopping center in Los Angeles and you order 3 ice cream cones and the guy behind the counter says “that will be $18”, he’s not f*&%ing with you on April Fools day, it really is $18.  Apparently those d@mn cones were gold plated and hand scooped by Haagen and Daaz – otherwise, how can they possibly justify that much for ice cream?!
2)      Before you leave on a trip and you won’t be around to f*&% with your husband in person, the day before, enlist the help of your daughter to safety pin his underwear together and also switch out all of his favorite coffee for really old nasty stuff.  I’d show a photo of the underwear, but I think that would ensure that my blogging privileges were revoked.  Daddy thought we were pretty clever.  He did ask, however, how many tricks we played just so he could be sure there wasn’t something else coming down the pike!
3)      When buying your children those small cereal boxes and then switching out all the kinds, make sure you open the bottom of the box.  Otherwise, when you try to tape the top of the box, it looks like you messed with the cereal and your 9 year old will be on to you instantly.

4)      If you stuff your kids shoes with toilet paper so that they think their shoes don’t fit anymore, watch out for what the baby might next do with that toilet paper . . . she was so proud of herself that she put the toilet paper in my rings so that I couldn’t wear them.  She insisted that I take a picture!! 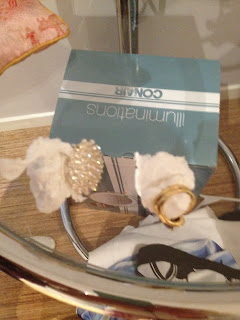 5)      If you ever go all out for April Fools one year, you’d better be ready to go all out every year.  Last year in the girls' lunches they had fake grilled cheese and several other surprises and for dinner I made meatloaf “cupcakes” and chocolate candy peas.  The children thought I’d do that again this year, but they weren’t in school and we were driving for much of the day.  They were very upset when they found out that I didn’t have time to do anything elaborate. 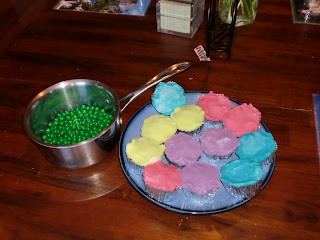 Lesson for today . . . the “Money Pit” keeps messing with us more than we hoped, and I did not mess with the children as much as they hoped.
Posted by Recovering Working Mom at 11:17 PM