Manicures, pedicures and hormones, oh my! 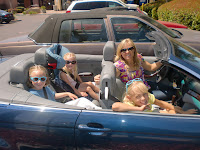 So it dawned on me today as I was driving with the top down on my car with my three blonde little cuties . . . that I gave birth to three girls. Think about this for a second . . . three girls (again, that Al Roker echo thing happens). This means that for the rest of my life I will be entertaining three girls (when I put it in italics, it’s my way of doing the echo thing through type). There will be no boy scout overnights, no guys nights out, no football games (well, ok, there might still be football games), no golf outings (ok, my husband doesn’t golf, but they’d find something to do all day) do I need to go on?!

And that leads me to today’s lessons learned. For today’s “Family Fun” I went old school and just e-mailed a girlfriend about a playdate. She suggested that we take the girls for haircuts and manis and pedis. This was perfect because the girls hadn’t had a haircut in probably 9 months and they’re leaving in 2 days for summer camp. What better time to get your nails done?! :)

Well, here are my lessons learned. Today I have four because they were all too good to pass up.

Lessons from the beauty salon and beyond:

1. Before planning a “fun” outing with your girls, be sure to check the hormone levels and social calendar of your 9 year old. She will make you absolutely miserable all the way there because she would rather be back at the Boys & Girls Club playing with her friends.

2. Children are like dogs who can smell fear . . . they can smell when you’re in a hurry, and that’s their cue to throw a tantrum, go slower than molasses, or decide that their legs are now broken and they cannot walk. They don’t care what’s at the other end of the rush, they’re not moving.

3. a. (This lesson has two parts) Do not believe your five year old when she tells you that if you take her with you rather than leaving her at the Boys & Girls Club she will be good when you are running errands.

3. b. Five year olds still need a nap, and when you find yourself trying to “out shout” your five year old, remember that it is your fault she did not get a nap today. Hair and nails were more important.

4. If you answer the phone when you are in the post office with the aforementioned five year old and the person on the other end asks “is this a good time”, always answer “no”. Responding in the affirmative and then trying to carry on a conversation while also mailing your children’s summer camp care packages and trying to keep the five year old from trying to break into someone’s P.O. Box with your car keys is just not a good strategy for winning mother of the year! AND, you still have to call your friend back because you didn’t really hear anything she was saying.

Priceless Quote from aforementioned five year old – Mommy and the Id are in the hobby store trying to buy items for Id’s sister’s camp care packages and The Id is making mommy so crazy that mommy says “You’re about to make me lose it sister.” And the Id’s response is “Lose it or Lose it Sister”. She was trying to say “Move it or lose it, sister” (ala Ace Ventura), but she was close. At that point, all I could do was laugh hysterically while the woman next to me contemplated calling CPS.

Today’s Resources: along the way I’ll provide feedback about the places we’ve been and things we’ve done. Today, I was not at all impressed with where we went. We had reservations for four girls to get their hair cut at Bambino’s hair salon off Carmel Country Rd. and they took three of the four girls quickly, but the fourth had to wait for 15 minutes. Also, when I asked them if they had a particular hair product, they informed me they were too busy to go check in the back. I was also underimpressed with how little they did with the girls’ hair once they finished. Chloe’s Carousel in Carmel Mountain does a much better job.

Had a similar experience at Nails 2000 right near Bambino’s. They did not have enough people to accommodate our reservation for four and the Id sat with her feet in the tub of hot water for ½ hour. I’m surprised there was anything left to paint by the time they got to her. The girls were none the wiser, but I was not happy.

Tomorrow we’ll tackle one of my family quotes that lives in infamy . . . “Come get me quick, you won’t like what they’re doing to me . . .” Also, homemade bomb pops.
Posted by Recovering Working Mom at 9:10 PM