This phrase was made infamous by my cousin Sam from a letter he sent home to his parents after he arrived for his first experience at sleep away summer camp. Of course, in some families, the parents would have sympathy for a child who went to such great lengths to describe his displeasure. Not in my family . . . no, in our family moments like these are seized and forevermore brought up to embarrass you at family reunions. No wonder people hate those things. Poor Sam has just graduated college and this moment in time is still haunting him.

I’m certain that the Id is actually the child who would send me such a note, but just in case, I had a solution for when I sent the Superego and the Ego off to camp this week . . . I went to the Disney Family Fun website and printed out their pre-printed letters with stickers. The worst they have in those letters is that the food “isn’t that tasty”! I’ll let you know if this keeps the "come get me quick" requests at bay.

In the meantime, here are my lessons learned from packing my children for summer camp:

1) DO NOT begin packing at 1pm on a Saturday when you will be having company coming over for dinner at 6pm. At 5:55 it still looked like a bomb had gone off in our living room.

2) Just buy new socks and underwear. Do I really need to label every single sock and piece of underwear for a two week stay?! First of all, I probably don’t want the underwear back anyway, and second, the socks will be so filthy it will be worth $6.49 to buy new pairs when they get home. After about pair 3 I decided to give up that little endeavor.

3) You probably don’t need to label the foot odor spray you slip into one of your children’s footlockers. If she loses it you really don’t want that to be traced back to her . . . the entire cabin will know who it belongs to anyway!

Resource: I bought the labels for my kids’ camp stuff at www.namebubbles.com. The labels are really cute and appear durable. I’ll let you know in 2 weeks. One drawback, they were really expensive, but apparently $40 is the going rate for name labels – it came with about 300 (which you would think would have been enough), but that wasn’t quite enough to cover everything. Oh, and don’t tell my husband that I spent $80 on name labels. After this week I think he’s going to start putting me on an allowance!

And, the bomb pops – once again, Disney Family Fun is the bomb!!! As I was trying to find fun things to send to my kids at camp, the homemade bomb pops caught my eye. So, 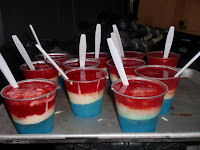 in my need for some “family fun” today, I decided to make those bomb pops. Holy cow are those things good!!!! But, lesson learned, do not require that your children finish their entire dinner (that was antipasto salad) in order to get one. Only one of three was eligible and now I have 11 bomb pops and 2 of the kids are leaving tomorrow for summer camp. Ooooops, who’s going to eat them now?!