Why Bake when you can Bakeify?!

Continuing with our “chillin’” theme, I thought we should have a fire and ice theme for our Camp Runamuk projects.   So, we played ice games and made igloo and campfire cupcakes.  We were going to make homemade ice cream, but as you will see, I’m an idiot and that didn’t go so well.


As part of our baking extravaganza, I used items from a friend’s new baking website www.bakeify.com.  It’s a great website that has all kinds of baking tools and items to make your project perfect (and easier on you)!!


Here’s what I learned when you allow your baking creativity to get a little out of control, and you think games with prizes are a good idea:

1)      Whoever invented the game hot potato is a dipsh*t OR, did not intend for children to play that game.  Just like musical chairs, that game makes everyone except one person feel like sh*t because they lose and then have to watch everyone else play while they are odd man out.  What was I thinking when I decided this would be a good idea?!  Well, lets just say that two crying fits later I decided to give everyone a prize because having winners and losers, particularly when those playing the game are 10 and under, sucks. 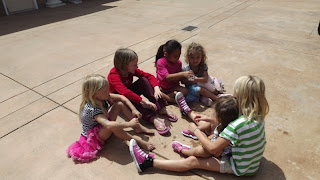 2)      When you give a 3 year-old a hammer and some hard candies, make sure you tell her to just “gently crush” the candies, not make them into a fine powder!  She was so excited to have a fun job that those candies looked like something we could sell on a street corner.  Thankfully we were just melting them anyway and they were perfect for the cupcakes. 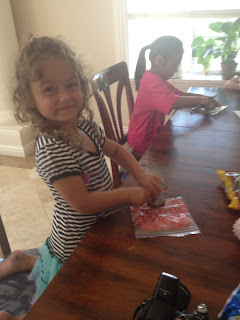 3)      When you try to make homemade ice cream, make sure that you put the ice cream maker paddle in the correct way.  I’ll be d@mned if I put the machine together upside down and could not figure out why it didn’t work.  That was $5 of whole milk and heavy cream . . . wasted!  I even blamed Husband from Heaven for buying the wrong part . . . until I looked at the manual.  D@mnit!!

4)      When you allow a 2 year-old to cut up the marshmallows for the igloo cupcakes, she will play “one for you, two for me” with the marshmallows!  She’s lucky she’s cute! 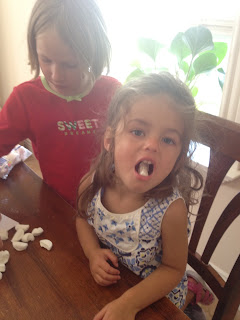 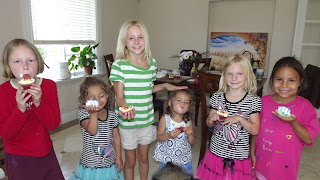 
are adorable and would be a great project, especially for a girl scout troop.  I found the recipe at www.recipelion.com/campfire-smores-cupcakes.  However, I modified it to:
1 box of red velvet cake mix
1 jar of lemon frosting
small bag of pretzels (even the snack size would be plenty) – broken into smaller pieces
mini marshmallows
12 hard red candies – melted together  to form a thin candy layer (I used cinnamon candies, but you can also use Jolly Ranchers)
toothpicks


After frosting the cupcakes (and make sure you fill them far enough so when they bake the cupcakes are higher than the liner), put 5 very small pretzel pieces in the middle to look like a campfire set up; put small pieces of the red candies next to the pretzel pieces to create the “fire”.  Put a mini marshmallow on a toothpick and voila, you have a campfire.  The Superego (oldest child) also added some pretzel “benches” for around the campfire.
These were super easy and the kids loved putting together all the parts. 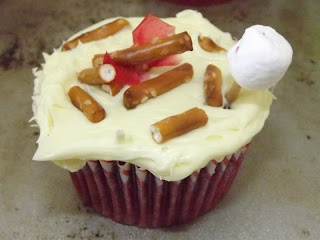 Igloo cupcakes
This one I pieced together with pictures online.  Essentially the recipe is:


White cake mix
White frosting
Blue gel
marshmallows cut in ¼
toothpicks
Frost the entire cupcake; turn it upside down; make lines with blue gel (or, if you run out of blue gel, improvise and throw some sprinkles on); attach “marshmallow door”. 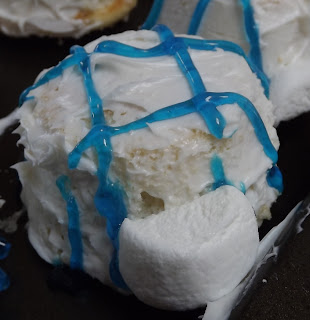 Items from Bakeify that I used:
Beater Blade – this thing is awesome.  If you have a Kitchenaide mixer, this scrapes the sides as it is mixing.  I broke my last one because I used it so much and was so excited to find another one.
Baking cups.  Rather than the same old pastel baking cups, I wanted something much more interesting and that depicted “fire and ice”. 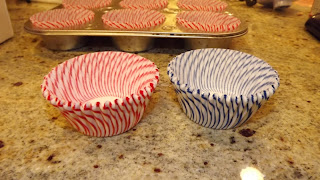 Sprinkles – I ran out of blue gel to make the igloos, so I improvised and put dolphins and stars on the tops of the igloos.  Regular sprinkles just weren’t going to cut it!  I needed something different and fun! 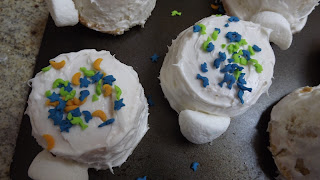