Cheaper by the half dozen

So this week my insanity has reached new heights and were it not for the fact that he’d fear I’d give him sole custody of the kids, I think Husband from Heaven might have seriously considered finding a divorce attorney.


Sometime back in February as we were on our way home from a weeklong ski trip, we were travelling through Vegas and I think I may have gotten drunk at a drive thru –how do I know this?!  When my cousin texted and asked for a huge cousin favor, I actually said “yes” when she asked if I would take care of her 3 year old and 2 year old for 12 days.  I think my answer must have been the result of a contact high from some crack as we drove through Vegas.
Before this week’s lessons, let’s give each of the cousins a nickname – We’ll call the three year old “Love Bug” - one of the first sentences she said to me was “I love you this much” and she spread her arms all the way out;

We’ll call the two year old “Off-road Rosie” – apparently when the Superego got out of the Barbie Jeep to go get something the baby decided it was her turn to drive.
For your enjoyment, here’s what I learned about being the mother of two toddlers PLUS three of my own children:

1)      When you agree to take your cousin’s two small children for the week, make sure it is NOT the week before you also have a triathlon thus preventing you from drinking alcohol.  Seriously, could this have been a worse week to agree to be the mother of five?!  Sure, I could drink, but I actually do not want to drown when I get in the ocean on Sunday.  And, I must say, it’s not my cousin’s kids that are the problem, it’s my own kids who keep fighting over who gets to sleep with the baby and who gets to hold her.
2)      All those 0 to 5 parenting books need to include a chapter on mixology!  No one needs a good drink like a parent.  That’s my next endeavor . . . Writing a 0 to 5 book that includes mixed drinks for all situations.  The first chapter will be entitled Sex on the Beach is how you got here in the first place, dumb@$&!


3)      When you go into IKEA for 2+ hours DON’T FORGET THE DIAPER BAG!!  Man, are we out of practice.  We went into IKEA and I figured the baby would be fine.  What I forgot was that IKEA is like the black hole . . . once you go in, you are never coming out!  When the Superego yelled across the store “SHE PEE’D ON ME” I knew we were in trouble.  Offroad Rosie’s diaper was so heavy I think there was another small child in there.  Rookie mistake!
4)      When shopping with a two year old, be sure you tell her about the speed limit on shopping carts.  Otherwise, you may find that she hits her sister at least three times at ramming speed.  I know the people she almost ran over in that supermarket were judging my parenting and my sanity! 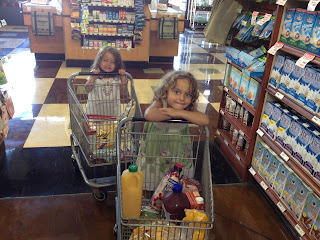 5)      By day 6, you may find out how lame your wardrobe is.   When the 8 year-old Ego said to me, “mom, you look like you’re ready for a party”, I was flattered until I realized I was in my swimsuit cover up, hadn’t showered, had been in the pool all afternoon and was lucky to have a bra on.  She also said , “you could just put on a belt and go dancing”.  This is, of course, from the sweatpants wearing child who insisted on wearing a tie to a recent family photo shoot.  I’d actually go dancing if I thought HfH wouldn’t kill me for leaving him with 5 children at bedtime!
I again raise a glass to all the stay at home mommies out there – particularly as we all brave the summer!  Until the next dance party . . .
Posted by Recovering Working Mom at 9:57 PM