It’s midnight . . .do you know where your child’s hyperactive Daisy Troop leader is?!

She’s on the couch, watching the Housewives of New Jersey Reunion (on Tivo of course), while cutting out 12 d@mn craft projects because she just realized that she is leading a troop of 12 Kindergarten and 1st graders who probably can’t cut out the fingers on the hands of the Girl Scout Promise craft she is trying to have them make.  Oh, and she’s also counting out beads for a bracelet project.
I finally succumbed to peer pressure (and lets be honest, my own control freak ways) to become the Daisy troop leader for the Id (the baby).  Yes, it’s because I love her more that I decided to be HER leader rather than the other two.  Did I just say that out loud?!  Actually, it’s because after 5 years of watching two other troop leaders, I’m finally confident enough that I can take all their tricks and use them for my own child’s troop.  That, and the fact that I couldn’t get any of my other friends drunk enough to say yes to this task!  This is another little secret that I learned – all the working moms wait for one of us stay at home mom suckers to take on this task.  It’s ok, I can say that, I was the “working mom” for 5 years.  Now it’s my comeuppance.
Here’s what I learned about entertaining and trying to teach Kindergarten and 1st grade girls about how to be a good leader:
1)      Leadership, responsibility, caring, courage, honesty, fairness . . . blah, blah, blah, it’s all overrated.  They don’t need to learn that.  We should just let the Disney Channel entertain and teach them how to be good people and call it a day.  See, there I go again, saying things out loud!  Actually, it was a fun experience.  I still can’t really tell if they actually had a good time, but they were so great at listening and participating and it was fun to be with them.  I also still don’t know how teachers do this for 6 hours a day.  I had a hard enough time entertaining them for an hour and ½.
2)      When you are a new girl scout leader, you really should try NOT to break the cardinal rule of girl scouts – no open toed shoes!  Every one of the girls and my co-leader had their close-toed shoes on and here I am with my flip flops.  In my defense, I was running from a meeting that took way longer than I expected, so I didn’t have time to collect myself before running down to the school for the meeting.  But still, really, I had to break the one major “no no”?!  D@MNIT!  What's worse, the Id says to me after the meeting "you really need to wear close toed shoes mommy, otherwise they're not going to let you be the leader anymore".  Well, if I knew it was going to be that easy . . .  (I'd add a picture of the troop here, but I don't have permission from all the mommies to post their kids pictures.  If I get permission, I'll post the pic.)
3)      If you would like to have the other mommies “feel your pain”, simply select a “take home” craft project for the girls to do.  I decided it would be cute to have the girls make bracelets with beads that had the letters of their names and also represented the colors of the Daisy petals they would be earning during their Daisy year.  This, of course, was BEFORE it took me 45 minutes just to make my own bracelet.   So, rather than do the project during the meeting I sent a bag of beads home with the girls so they could finish their bracelet with their mommies.  It’s ok mommies, you can thank me later!  Just know that I’ll be suffering along with you as I make the Id’s bracelet (I think I'm actually going to put "Id" rather than her real name). 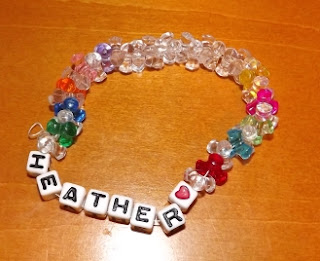 Oh, and here’s another tip – buy extra “A” beads.  We ran out and I had to destroy my bracelet to give a little girl my “A”.  Since the girls can’t yet read anything but their own names, I’m thinking of putting “Dumbass” on my bracelet (as in the Dumb@ss who said “yes, I’ll be the leader”).  Of course, that would require another “A”.  SH*T!
Posted by Recovering Working Mom at 7:28 PM