. . . It was 1am and we had just landed in the home swamps and alligators, oh, and the second Happiest Place on Earth.  (Can't ever replace the original!)  I thought we had stepped into a sauna!  The girls’ photo yesterday was at the Orlando airport at 1am.  We had 15 suitcases, 5 Dugdales, 3 nights and 2 days to conquer Disneyworld!
On day one we didn’t get to bed until 2:30am and had to be up at 6:30am so that we could be ready to go into the Magic Kingdom park at 8am.  Really, we thought it was a good idea to fly in at midnight and follow it with a full day in Disney’s Magic Kingdom?!  We’re delusional.
Here’s what we learned about our two days in Disney World:
1)      It is definitely the happiest place on earth until 5 minutes after the fireworks show ends and the children realize it’s time to go home and they can’t go on any more rides.  Then all hell breaks loose and it’s a parents’ worst nightmare.
2)      When there is a barf bag provided INSIDE the Mission Space ride that you just sat down in, you really should ask if you can abort the mission.  We decided to go on this ride that simulates a shuttle take-off.  It wasn’t until I was securely buckled into the ride that I noticed the barf bag in front of me.  Thank God the Id and I survived unscathed.
3)      A Superantioxidant Sangria at 10pm poolside never tasted so good.  It was 10pm, we had returned from the Magic Kingdom and by d@mn we were going to take full advantage of all the amenities our hotel had to offer.  So, we let the children (who were going on 4 hours sleep and 12 hours in a theme park) go in the pool.  Mommy, however, stopped by the bar first.  Honestly, that Sangria saved my sanity.  May not have been a good idea to put my feet in the hot tub, however.  That made me so tired I barely made it home!
4)      Epcot is very cool and for us, everything was new.  Highly recommend it, especially Spaceship Earth. 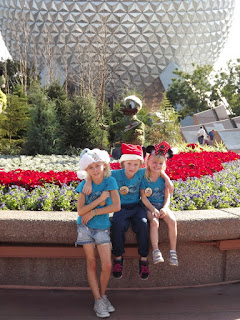 5)  Magic Kingdom is great as well.  Some things are the same as Disneyland, but some are different.  Here are recommendations if you ever plan a visit:
a.       Risk the wrath of the school district’s nasty letter home telling you how important it is that your child not miss school and pull them out early.  We had very few, if any lines, and were able to accomplish almost everything in 2 days.
b.      If you’ve been to Disneyland, at the Disney World Magic Kingdom, most things are the same, except:
i.      Pirates of the Caribbean wasn’t nearly as good – if you don’t have a lot of time, skip it.
ii.      Mickey’s Philharmagic – a very cool 3-D movie similar to Fantasmic
iii.      Cinderella’s Round Table dining – this is where you can dine inside the castle.  Make sure you call 180 days in advance for reservations, but even if you don’t, go to the check in desk first thing in the morning and you will more than likely get a table for lunch.  We tried for 3 weeks to get a reservation over the phone and on the day of I walked up just in case to ask if there was any availability and sure enough, we got a table.  Lunch was fantastic and the girls saw 4 princesses, got pictures and autographs and we didn’t have to wait in 4 lines.
iv.      Tangled Meet & Greet – go to this immediately when entering the park
v.      Peter Pan – definitely much better a D-World
vi.      DO NOT ride the speedway cars.  That was hell on earth when we got a defective car that kept hitting the rails.  It was either that or the fact I let the 7 year-old Ego drive.  I saw a glimpse of her driving at 16 and there is no f*#&ing way I’m teaching that child to drive.  She’ll drive me right off a cliff – literally and figuratively.
vii.      DO NOT tell the children that the characters sign autographs or let you take their picture.  We’ve never spent so much time waiting to take pictures!  But, the kids were so excited at all the pictures and autographs they got.
We’ve survived our trip with a magical mouse, now it’s on to the real vacation . . . you know, the one where Grandma and Grandpa are there as well as a Kids Club to entertain the children!  Not sure I’ll be signing on again until after we return.  But, be assured I will catch you up!
Posted by Recovering Working Mom at 6:35 PM

Email ThisBlogThis!Share to TwitterShare to FacebookShare to Pinterest
Labels: Disneyworld, Traveling with kids