. . . and all through the house, all the creatures were STILL bouncing off the f*&#ing walls because mommy DID NOT  manage their sugar intake and in fact she made sure they ate so much sugar it was going to take 4 days to de-tox them!!

In true Runamuk fashion mommy and the girls hosted a mish-mash holiday party with a purpose.  This time it was Hallo-Giving Chrismakuh and it’s now November 12th and we’ve done all we need to do for the holidays, right?!  We’ve celebrated all of them and we even added our standard charity component that wouldn’t be Runamuk if it didn’t combine a canned food drive meets extra candy drop off meets toy drive!

Mommy’s been away from blogging for a little while (something she’ll explain in the next post), but she thought she’d start up again with a bang so you all didn’t wonder if she had a lobotomy or fell down a holiday rabbit hole!

1)   When trying to be clever with a game, ALWAYS FOLLOW DIRECTIONS!  I thought it would be so great to give our Grab the Ghost game a little twist (and make it more fun for the kids) by making the ghosts out of Tootsie Pops.  Well, there’s  reason that the Disney version says “use small rubber balls or wads of paper”.  They’ve seen what happens when you put Tootsie Pop ghosts in the hands of 7 year-olds.  They are likely to do THIS:

In this game the children grab their ghosts quickly away from the middle so that the “grabber” can’t catch them.

What the instructions don’t say is “DO NOT make the dumb@$$ move to put anything harder than a paper towel in these ghosts because when the children “yank” the ghosts away, they MAY smack the sh*t out of themselves”.  Oh yes friends, we did have one bloody lip casualty when one of the little ones smacked herself with her lollipop.  That was a fun explanation to mom.  “Hi, your child came to our house for a fun party and her “treat” to take home is a lip the size of Texas”!  SH*T!

2)   If a friend comes outside to tell you “note to self, next time the popcorn project should NOT be in the kitchen” – DO NOT go inside to check it out.  Otherwise, you may find THIS 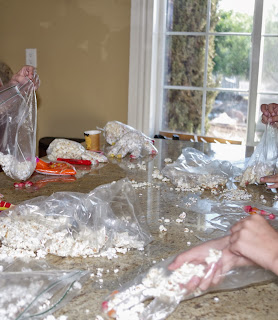 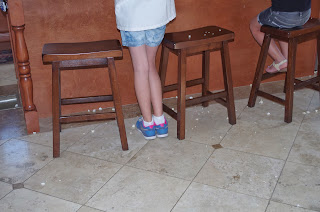 Who’d a thought that these little boogers could make this much mess???  Oh, wait. . .

But, here’s my Thanksgiving gratitude . . . “I’m eternally thankful for all the mommies who cleaned up this enormous mess and left my kitchen beautiful by the time the party was over!!”

3)   When making a sample for your jar decorating project, just let the children decorate the jars without any instruction or sample from you!  Can you guess which one is mommy’s and which ones are the girls? 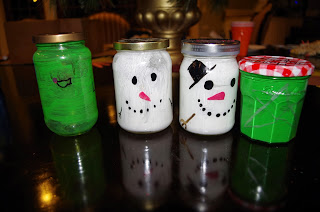 Yeah, mommy’s would be the lamest one with the half drawn Holly leaf that she gave up on after realizing she had no f*&#ing idea how to actually draw a Holly leaf.  The snowmen are waaaaaaay cuter, and even the baby’s little star is better!

4)   DO NOT put homemade frosting in the refrigerator.  Serve that sh*t warm.  For if you do not, you may have one of your smart@$$ mommy friends say “sister, you really need to add some trans-fats to that frosting of yours.”  She was right!!!!  The poor kids were trying to spread my homemade frosting and it looked like a crumbly experiment gone wrong.  Where do they put the instruction in the recipe that the butter will re-harden and make it virtually impossible to spread.    No good frosting deed goes unpunished!

5)   And finally, when weighing the donated candy at the end of the party, make sure it is NOT the day that your monthly friend comes and you are bloated and your heaviest! 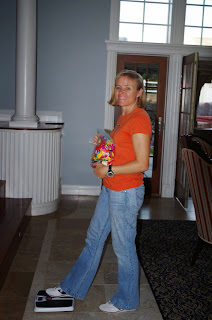 Apparently our scales only want to weigh humans, which then meant that mommy had to put herself on the scale WITH the bag of candy.  Which then meant she had to do some extensive math to figure out exactly how much candy that was.  Who’s f*#&ing idea was this again???? Oh, and by the way, Husband from Heaven’s eyes popped out of his head because of my earlier TMI moment and he revoked my blogging privileges again!!

We had our usually messy mishaps, but here’s the Pinterest version of the party.

1)   Add a charity component.  I had everyone bring something that would go with the theme of each holiday –
Canned food and provisions for Thanksgiving boxes
Unwrapped New Toys
Leftover Halloween candy

Here’s what the children and their families donated

Not a bad charity day!

2)   Food – Here’s a Thanksgiving Feast your kids will surely eat!

3)   Games – I thought the kids hated them, but the parents later told me the kids LOVED them.  So, if you do this, make sure you:
a.     Have the kids play dice games that involve money (wait, will the Nana add this to her custody file?)  Once the kids grasped the rules (which took much longer than I anticipated), they had such a great time, and the fact that they got 5 pennies to take home was the icing in the cake. 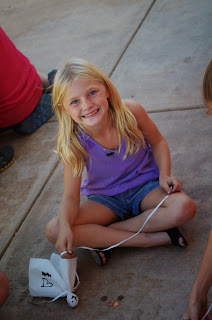 b.     Be a bit more organized with the relay game – We had NINE kids on each team and I thought they were going to bulldoze each other!!  Oh, and we did have some cheating offenses!  But, when describing the party later that evening, all the girls could talk about was the relay!  I wish I had a good picture of this, but we had the kids push a pumpkin with a broom through a few obstacles and then at the end they had to put on a cape and glasses and get back to the other end.  They were hysterical.

4)   Projects –
a.     Thankful Turkeys – we had the party on veteran’s day and if I’d really been thinking I would have asked the kids to write what they are thankful for in relation to our soldiers, but their “thankful” wishes were very sweet.  These were Hand and Foot turkeys and they really turned out so cute. 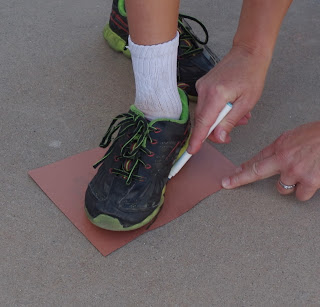 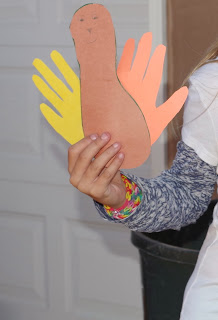 b.     Candle jars – stole this from the Ego’s girl scout troop leader.  Just put a little paint in a jar, have the kids paint the inside, and then decorate the outside with paint pens.  They dry very quickly and the designs they came up with were fantastic!

c.      Marshmallow Menorahs-Just take some frosting to stick the marshmallows to the card stock, stick a candy corn in the marshmallow and it's done!  The best part about this one was one of the moms who was helping explained to the children what each candle meant.  Very cool. 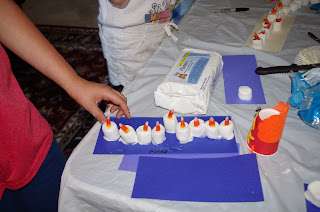 d.     Popcorn monster hands!  Other than the enormous mess, these were super easy with candy corns, popcorn and food serving gloves!  The kids loved them! 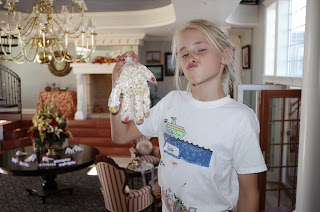 e.     Last, but certainly not least – COOKIES!!  Frosting + sprinkles = ultimate holiday happiness.  Just make sure your frosting is plenty warm (because post Real Food Wars mommy was not about to let them eat the “fake” stuff)!  Oh, and notice the not so green sprinkles - yup, those are naturally colored green sprinkles and the candy cane is natural too.  I love the Natural Candy Store!! 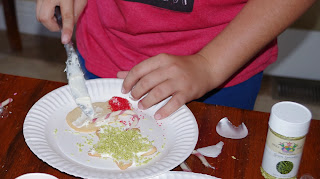 You know it's been a good party when at the end of it, THIS is what your table looks like!!