So what happens when your week starts out on Monday with a 4am wake up call from the baby that says “Mommy, I barfed in my room . . . can I sleep with you?”   By Friday when you are sitting in the hospital with your oldest child, you will ask yourself “can we just go back to the barf on Monday”.

The holidays are off to a Runamuk bang for the Dugdale clan.  The Monday before school was out before Thanksgiving (so two weeks ago) the Ego and the Id stayed home with a terrible cold and stomach flu.  By Wednesday the Superego had broken her arm in two places while doing a trick at gymnastics, and by Friday (when we were supposed to be flying to Denver to see Grandma and Grandpa), Mommy had stitches removed for a previous skin procedure, and we were in surgery to fix the Superego’s arm.

By the Monday of Thanksgiving week (a week ago) we had finally made it to Denver (3 days late), but almost immediately the Superego came down with a stomach bug and was vomiting all night long.  Exhausted can’t begin to describe how we were all doing, but I have to say, the Superego is my hero.  Her strength and resolve is unmatched.  After everything she had been through, she only complained when the pain meds and antibiotics made her sick.  That kid is amazing.

But, as it always does, life just kept on movin’, and taught us some lessons along the way – such as:

1)   When something like this happens, you might find out just how effective those 'Just Say No' Red Ribbon Weeks are.  When the paramedics asked if she wanted morphine, the Superego said "NO".  She actually lasted 4 hours before getting any pain meds and the only reason she did was because of how painful it was when they had to move the arm for an x-ray. I asked her why she didn't want the morphine and she said "because that's a serious drug and I'm not supposed to take those".  Of course, what mommy shouldn't admit was what happened when the paramedics asked me “would you like us to give her morphine?”  In my shocked fog I heard “would you like morphine”.  It wasn't be until 30 seconds later that I realized my response of “no I’m fine” was completely inappropriate!

2)    When you finally get your children home from the ER at 3am, and the two youngest still go to school the next day, you MAY want to give their teachers a heads up that they might be “crankier than usual” (which also means b!tches on wheels).  I can only imagine the torture the Id put her 2nd grade teacher through the next day.  She was a holy terror when she left our house.

Of course, you may be asking “why did they have the other two children in the ER?”  Because they really wanted to see their sister and we thought we would only be there for a couple hours.  It wasn’t until Husband from Heaven was about to go home at 10pm that we also realized that because I had ridden in the ambulance, I had no way to get home.  At that point we figured “it can’t be too much longer, right”.  Famous last words . . .

3)   When you are home with your injured child and you notice that she is sneaking into your bedroom (that she has made her home base because her room doesn’t have a TV – who’s f*&#ing idea was that, anyway?) – PAY ATTENTION to what she has in her hand.  It wasn’t until 45 minutes later that I realized she had gotten the hamster to be her companion for the day.  Of course, about 20 minutes later the Superego lost track of the hamster.  I then asked “where’s the hamster”?  Much to my delight, the Id answered “Oh, I know, I put her in here”.  And then she proceeded to walk over to my BRA DRAWER.  Unfortunately, by the time we got to the bra drawer, the hamster had escaped!!!  It took another 2 hours to find the hamster, and this was the present that I found 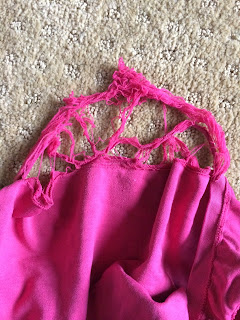 What is that you ask . . . That would be my underwear!!!!!  At least they were the granny panties!  Although after the thong underwear of this summer, I’m pretty certain I’ve confused the Id.  What is it with that kid and my undergarments???!!!

4) When doctoring your child's clothes, DO NOT do it the day after you get home at 3am from the ER.  For if you do, you may find that as you are supposed to be cutting the sleeve, but in your fog you will accidentally cut the body of the shirt instead.

4)   And finally, when ordering an item for your child and having never experienced this before, READ THE FINE PRINT on the description of the item.  For if you do not, you may find that when your “medium long arm” dry cast cover arrives, you can actually fit your child completely inside.  Mommy’s an idiot!  I just made an educated guess.  Little did I know that to the manufacturers, a medium size long arm is one which belongs to a 6’2” man.  D@MNIT!!! 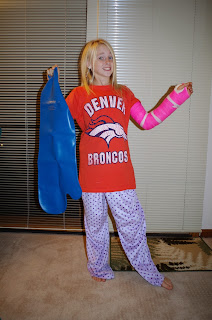 Needless to say, it has been a long two weeks (we did have some nice R&R with Husband from Heaven’s family, but it was a looooong road to get there). The Superego is one of the bravest kids I know and here are a few items for a broken arm that we’ve learned about the hard way (they seriously need to provide much better instructions from the hospital):

1)    RadyChildren’s Hospital – Unless it is a time sensitive issue where your child must get to the closest hospital, always ask to be taken to Rady Children’s hospital.  We had a choice to go to a closer hospital, but were urged by a friend to go to the Children’s hospital.  I am so happy that we did.  They have an amazing staff who took care of us quickly and in a such a kind and caring manner.  The x-ray staff could have been faster, but the nurses were responsive and anytime a nurse or other staff member saw me wandering around a bit worried, they asked “are you being taken care of momma?”  They were phenomenal.  One area where I will be approaching them for improvement – a parents’ cell phone charging area.  As anyone who has been through this can attest, the one thing that you need (and will, of course, never remember to bring in your moment of panic) is your phone charger so as to stay in touch with loved ones.

2)    CastCoverz – incredible company where after I made my order the owner noticed that I may have selected the wrong size sling and cast cover.  She decided to call me herself and make sure we had the items that would be best.  She also provided me with helpful advice that actually saved us money, AND, mom to mom, recommended that we NOT get the white trim sling the Superego wanted because it would get filthy (the white was $10 additional).  She put mom advice above profit.  I cannot tell you how much I respect that!  Also, they were the only company I found that had such a great array of products.  (I'd show you a picture of the Superego's picks, but she's at school right now and I need to get this posted!)

3)    DryPro cast shield.  Once you order the “size appropriate for a small child, not the size of a whale”, this was the number one suggested item from friends who have gone through this too.

4)    A cheap seatbelt cover makes the perfect sling cover to prevent chafing and scraping.  The sling they send home from the hospital is flimsy and has a metal clip that sits right on the shoulder.  :-(  So, we improvised. 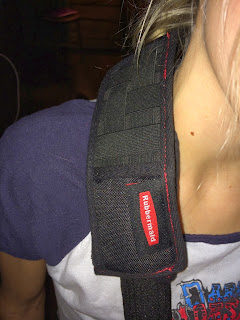 I am thankful for the lessons learned from this experience, but well wishes to have a safe and happy holiday have taken on a whole new meaning.  So, here’s to an uneventful holiday season!
Posted by Recovering Working Mom at 11:31 AM


2) "Stay at home" mom is code for "at the gym, grocery store, dance studio, soccer field, insert child's activity location here, child's classroom, and any of the other 15 places I'm needed other than home".