. . . it was a baaaaaaad stay at home mommy day, and I kept wondering when someone was going to jump out of the closet and yell "April Fools"!

The rain stopped me from doing my run in the morning, a strep throat false alarm hijacked my mid-morning and afternoon, and my poor coughing child hijacked my evening.

I did, of course, find time to f*&# with the children though!  I still haven't figured out why none of them get me back.  It must be fear of retribution.  Of course, the Superego (oldest) spent the better part of her strep throat false alarm trying to figure out ways to mess with her sisters and her dad.  That should have been my first clue that she was a big faker.  But, she came up with some clever tricks that I may have to use again.

Here's what I learned about messing with your kids on April Fool's Day:

1) DON'T DO IT!  Otherwise, the little boogers will find a way to convince the nurse at their school they have strep throat and you will spend the better part of the day driving all over creation trying to get a Dr. appointment for your hypochondriac.

2) When you make "hamburger sliders" for dinner, you may want to let your husband in on the joke!  The poor guy came home and when the Superego told him we were having sliders for dinner he got so excited that he asked "do you need me to bar-b-que the sliders?"  I know that he was extremely concerned about what I did to his grill when I said "nope, I got it covered" and he couldn't smell the burgers or see the evidence of them anywhere.

3) When you allow your oldest child to "cook" her paper "Brown-E's", your husband just might ask you "did you really turn on the oven for her to cook those?"  He really does think my blonde roots run deep!!  For the record, I let her put the pan in the oven after it had been turned off a while - it was just long enough to make them warm.

2) Tissue paper in the shoes won't be as big a deal as you hope, but I'm pretty sure the children were just embarrassed that mommy got them and they were waiting for "the other shoe to drop".

3) Pizza cake was actually pretty tasty.  One tip, when you make your Pizza bundt cake, go easy on the "cake" part and add more filling.  Husband from Heaven kept asking "where's the meat"?

4) Hamburger sliders make a great recipe for using up all those extra Girl Scout Thin Mints!

The Superego's April Fools Pranks
1) It's always fun to mess with the toilet bowls.  But, make sure you only color the water of those that actually get flushed!  Otherwise, there will be a permanent pink ring around the bowl. 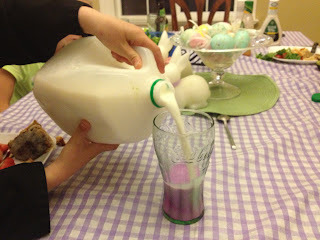 3) When you give your sisters paper "Brown-E's", make sure you remind them they are not edible. The Ego and the Id actually were proud to show me how "delicious" they were.  Talk about roots running deep . . .

4) If you mess with your sister's after school snacks, you better have brought real ones or prepare for the tantrum of the century which will result in a "food fight".  The Superego replaced a bag of chips with a bag of orange peels and put water in an applesauce squeeze tube.  When the Id realized what happened she threw the orange peels on the Ego, and that was a loooooooong drive home from school. But, I have to secretly admit that it was worth it because this was probably the best prank of all!

I've missed everyone and I will try to post a bit more, but every time I say that's it's at least 6 weeks between posts.  Until the next blonde moment . . .
Posted by Recovering Working Mom at 12:36 AM