Always more time for foolin' the kids . . . and margaritas!

What happens when . . .
1) The Easter Bunny comes waaaaaay too early;
2) You have a mommy who takes sick joy out of “foolin” her children and their friends; and
3) There is an international holiday centered around margaritas?!

Mommy decided that she still wanted to have her spring egg hunt, but couldn’t get her sh*t together fast enough to do it before Easter, so she decided to have it 3 weeks later and make it an April Fools, Cinco de Mayo Spring Egg Hunt.

Here’s what we all learned when the children and Husband from Heaven let mommy’s creativity run wild:


Anyone under the age of 4 CANNOT be corralled!  Now mommy should know this, this ain't her first rodeo . . . But, apparently her mind has blocked out the insanity of dealing with a child under age 6 (which is the Id's age).  I thought I was being so clever, so I split the kids up into four different groups by their ages.  Wouldn’t you know it . . . it comes time to start the games, all the kids are there, except GROUP 2.  This was made up of those misfits who were 4 and under.  Those little boogers could not be found anywhere.  It has been way too long since mommy dealt with herding those cats.  So, group 2 just did what they d@mn well pleased all day (as they always do – we should have named them the Terrible Group Twos!!)

2)  If you have games scheduled for the children, make sure there is time for stretching. . . not for them, but for the moms that you have just put in harms way and asked to “monitor” the Steal the Egg game.  Have you ever actually tried to get out of the way of a game of Steal the Egg (or more commonly known as Steal the Bacon)?! Apparently mommies can actually pull their butt muscles trying to get out of the way of a child barreling at them full speed to get to the Egg first!!! 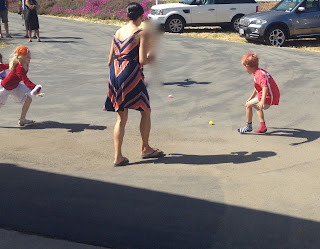 3) DO NOT put a Marine Lt. Colonel in charge of the relay race.  For if you do, you may actually find that the length of the field he has asked the children to run one way is the length of a football field.  By the time the kids had finished, I think they were all ready for a nap!! 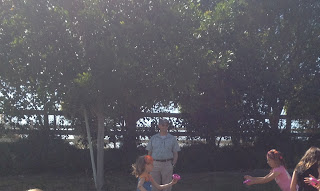 4) When you include an April Fools egg in the Egg Hunt part, make sure that you let the kids know that they only want ONE of the purple eggs.  As is my style, of course, I made several eggs that instead of candy, had bird seed and a note that said "April Fools"!  I'll be d@mned if one little girl wasn't so proud of herself for all the purple eggs she got.  I'm pretty sure it's because everyone else discovered the trick and those were the only eggs left!!  She was a good sport about it and then, of course, everyone wanted one of her "bird seed" eggs!

5) Always ask Papa Sir to make the margaritas.  The mommies could NOT get enough of those Strawberry concoctions.  I’m not even sure he actually used a shot glass to measure the Tequila.  No wonder they were so good!!! He’s invited back next year.

Until the next Holiday that mommy decides to mess with . . . Have a fantastic Cinco de Mayo!!  We already did! (A DIY on the games and projects will come soon - mommy doesn't have enough of her sh*t together to type up that portion).  :-)
Posted by Recovering Working Mom at 11:04 PM