. . . POOF, you’re SECOND child is now one year shy of being a decade old too! (Warning . . . the following contains more cuss words than usual.  Mommy's not really sure why.  Maybe it's been building up.  She did drink 4 days this week).

WTF?! . . .when did my kids get so old?!  And, why have I not learned to stop asking the Ego (the middle child) what theme she wants for her birthday party?!  Last year it was Tom and Jerry.  Seriously, a cartoon that hasn’t seen primetime since I was in the third grade?!  This year it was Wizards of Waverly Place.  At least this year was a bit more mainstream, but girlfriend pushed my creativity limits because apparently no one does these kinds of parties.  Just ask Party City or Oriental Trading!

First she asked to go to Medieval Times.  So instead of NOT cleaning my house,  NOT planning one single moment of the party, and sitting back and enjoying some good old fashioned entertainment. I had the brilliant idea that I would talk her into not just a party, but a sleepover!  I have GOT to stop drinking so much.

So, mommy just made sh*t up, as she’s been known to do.  At the very bottom of the post is a list of the things I did along with the spells/rhymes to go along with them.  Unless you plan on pulling a rabbit out of your @$& . . . I mean, hosting a Wizards of Waverly Place party, you can stop reading after lesson #4!

Here’s what mommy learned about magically bringing your child’s birthday wishes come true (and pulling a few surprises out of her @$&):

1) Steve Spangler’s Jelly Marbles are just as bad as those f*#&ing As Seen on TV products.  I fell for this suggestion as a “magic” disappearing act where the marbles were supposed to grow in water and would reveal a secret message underneath.  The only thing my marbles revealed was that mommy was losing her marbles thinking that these would become so clear you could read something underneath them.  THEN, to make matters worse, I thought the directions said that if you let them dry out, they will shrink back down.  The only thing I got after that experiment was a bowl of moldy marbles 3 days later.  I wish I had taken a picture to show you that one.

2) Although a sub shop may be good enough for the wizards, it just ain’t gonna fly with nine-year old little girls. Bless those little girls – they each took a small sandwich, but they pretty much had a dinner of chips, pretzels (magic wands, of course), bubble gum and grape flavored soda.  Did I mention that for birthdays there is NO REAL FOOD allowed?!  I think that’s a rule somewhere.

3) When you purchase supplies to make magic wands, just give up on the fact that they need to be red and either spray paint them beforehand, or let the children deal with the fact that they will not be the color of the actual wand in the TV show.  I thought I’d have the bright idea to glue felt onto wooden dowels and the girls could then decorate them to look like wands.  DUHsaster is what this was.  To save my life I could not get that f*&#ing felt to stick and then I think I may have glued myself to the tablecloth!! 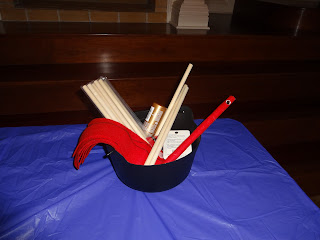 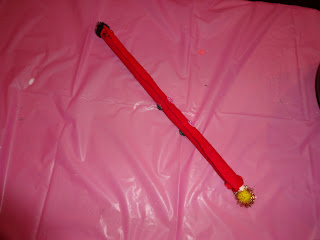 4) Who’s bright idea was the f*&#ing karaoke machine?!  I thought this would be a great activity for the girls . . . until I realized that meant I'd be listening to “Call Me Maybe” and “We are Never Ever Ever Ever Ever Ever Getting Back Together” ad nauseum.  I may have added a few more Ever’s so that you all could relive it with me.

5) When you give children glow sticks and allow them to run around outside, prepare yourself that one of those glow sticks will end up on your roof.  I'm pretty sure it's radioactive up there by now!

Of course, despite all my b*tching, I think mommy had just as much fun as the girls!

How to throw a Wizards of Waverly Place or other Magic Themed Party:

1) Don't forget the spells.  Have one for each child to say at the party.


Welcome to the Wizards lair
To make you wait would be unfair
And so here is where it will all begin
With great food so we all can dig in.

3) And of course a potion (made with Mr. Bubble bubble bath, food coloring and essential oils for scent)
Wizards need some devotion
To making lots and lots of potion
So follow me, onto the porch
Where we will make our own of course. 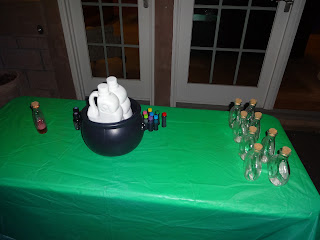 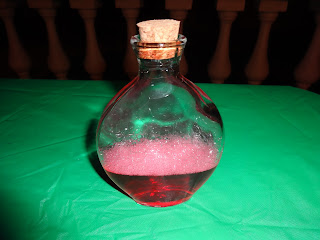 4) And the infamous wand
Wizards cannot make all their magic
With the help of hats and rabbits.
So now we must go and make
A wand that does not look like a fake.

5) Spell book (made of composition books, piece of felt and foam stickers)
Every wizard’s prized possession,
In which they make every confession
Must have just the right look
Because it is their spell book. 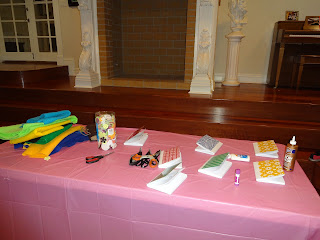 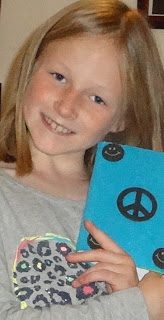 6) F*#&ing Jelly Marbles - SKIP THIS
The next activity could take some time
To show itself and maybe rhyme
So from down below,
the art should show!

This was the clue that was supposed to "reveal" itself!
We all enjoy
something hokey
. . . so now lets sing
some Karaoke

7) Max's Magical Jelly Bean game (guess the Jelly Belly's - while this was fun, you could skip it)
Max eats everything, but keeps so lean
So now we will try and guess the bean
That tastes the best
And puts us to the test 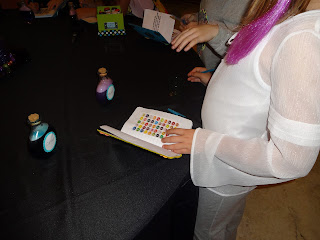 8) Goodie bags, of course.  You need something to hold all their magical loot!
When we leave we’ll be so sad,
But we’ll have goodies, so that’s not bad
But first we need to pick a bag
That’s just right and does not sag.

9) Glow sticks work wonders to amp up the children.
Our magical games have been fun,
But we are not quite done.
If into the dark we will go,
We will need something to glow

10) And . . . transition to bed time!
With all of our activities done
It’s not yet time to end the fun
Putting on jammies and brushing teeth is groovy
So we can end our night with a movie.


Posted by Recovering Working Mom at 12:21 AM