So I’ve been at this mom thing for over a decade now, and for all that time I’ve been traveling with children.  And yes, I need my head examined.  You really think I would have learned a few things by now and that I would be much better prepared.  So when we left for memorial day and the kids said they had packed their carry-on backpacks with all the entertainment they could need, I really should have double checked what that meant.

Here’s what I learned about getting lazy about vacationing with your kids:


1)      At 4am when you leave for the airport, you won’t give a crap what’s in their backpacks.  You’ll assume that because they’re full, they must have some useful stuff in them right?! Well, here’s what happens when you notice the baby is weighed down by her backpack and when you check what’s in it you will discover that her older sister has put the ENTIRE F*&%ING SET of Beverly Cleary books in the backpack.  Yes, that’s right, the Ego (middle child) decided that on a four day trip she was going to read all 14 of the Beverly Cleary books.  Girlfriend has had the books for a year and hasn’t cracked one of them open.  And, yet, she decided that today was going to read them all and also make her sister carry them all the way to Indianapolis.  I do not even want to know what the people at the airport at 5am were thinking as they heard me yelling at my daughter; I was madder at myself for not double checking than I was at her for trying to kill her sister with over a dozen books in her bag.  Was she planning to push her sister out of the plane mid-flight and just wanted to make sure she’d sink?! 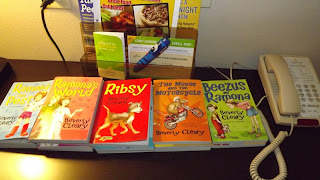 2)      When you ask the baby to pack her own snacks, make sure you specify that the snacks need to make it into her backpack – that is, if she has room after the dozen books.  She swears up and down she got snacks, and I’m certain that I saw a bag of pirate booty on the table.  I just didn’t realize it was hers, and of course, she thought it would magically appear in her backpack.  So, leg one of the flight was miserable because she was screaming about how hungry she was.  Seriously, am I new here?! – Momma’s should NEVER leave the house without a snack and sanitizing wipes in their bra!  D@MNIT!!!!


3)      Just because an 8 oz. bottle of expensive conditioner fits into a quart size bag does not mean they will let you on the plane with it.  I don’t know what the hell I was thinking.  I put the children’s conditioner in a quart size bag and thought “ok, it fits, so they’ll let me on with it”.  The guy at the airport could see my anguish in trying to decide whether to tell Husband from Heaven I’d have to check my bag, or just buy another bottle.  I’m certain HfH would pick "check the bag" if he knew how much the bottle cost, but I didn’t have the energy to tell him at 5am!  Lets see if he’s still reading the blog . . . I’ll let you know if he ever asks how much that bottle cost!  J


4)      Always be grateful to your father-in-law who sends you drink coupons for use on your flight.  I don’t understand how he knew we’d need that.  Of course, the first chance I got I ordered a Bailey’s – I figured it was at least close to breakfast like fare.  I thought HfH was going to pretend he wasn’t with me when he said “you do know it’s 8am, right?”  YES, but we’ve been up since 4am and I need something to dull the pain of the baby’s voice.
Number one moral of the day . . . when you’ve made it through security relatively unscathed and your children are all settled with their Starbucks coffee cake you bribed them with, DO NOT say the following to your husband “we’ve actually turned a corner and it’s nice to travel with them now”.

Immediately thereafter one of the children will kick a suitcase into your husband’s shin; the baby will be reprimanded for kicking a lady’s seat; that same baby will yell at you the entire flight “I’M BORED” despite having several markers, stamps, and a movie to watch; or my personal favorite . . . when you land, the flight crew will tell you this is your through aircraft and 5 minutes later will tell you that you need to disembark immediately and run 15 gates to meet your actual plane that they’ve switched you to . . .


There can be a bright side, however.  The Nana and Sir met us in Denver, so the Id (the baby) and the Ego sat with Nana for leg two.  She, of course, looked like she could use one of those drink coupons by the time we got off the plane!!
Weekend's off to an interesting start, so we’ll see how the rest of the weekend goes . . . including what’s supposed to be the hottest Indy 500 in many years – While HfH and other family members are at the race, the Nana and I will be at the air conditioned Children’s Museum!!!!  We'll see who got the better end of the deal.
Posted by Recovering Working Mom at 7:48 PM