Stepped off the hamster wheel . . .

I’m certain that if I actually calculated the amount of time I spend cleaning up after my children, (or chasing them to clean up after themselves), it would eventually equal months, if not years of my life!

After a particularly trying day of chasing after the children to clean their rooms, I finally broke down.  Lets just say that an outsider would not have been able to tell who the children were and who the mommy was by my behavior.  It got so bad I actually send HfH to take the children to school for fear I just might pull the car over, leave them on the side of the road, and tell them to walk the 6 miles to school.

So, here’s what I learned about getting worked up over the mundane:

1)   The silent treatment works wonders for getting the children to do their chores.  After they left that morning I wrote a list of 8 chores for each of them; I posted the list on their side of the house, and HfH served as the supervisor when they got home (because mommy had locked herself in her room and wasn't speaking to anyone).  I’ll be d@mned if those kids didn’t get all this work done in ½ hour!!!!  Well, except the Id (the baby) who took 3 times as long, but an hour and ½ is much better than the 4 hours it usually takes her.

2)   NPR is a very effective child torture device.  I was so ticked at them that when I picked them up from school SIX HOURS later I refused to allow them to listen to music and they had to suffer through the afternoon newscast.  Warning, this may be punishment for you as well.

3)   Vacuum cleaners and eight year olds DO NOT MIX.  I knew that one could go terribly wrong, and sure enough, here’s what mommy spent 30 minutes peeling out of the vacuum: 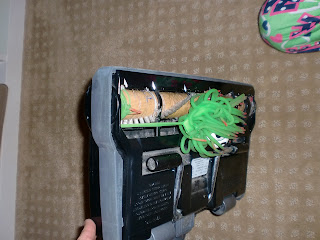 Moral of today’s story . . . if you want to something done, communicate through an intermediary, preferably one that involves a sharpie and lists on the wall.
Posted by Recovering Working Mom at 2:26 PM