. . . I have turned my children into family fun addicts and I have no one else to blame but myself!
Today was President’s Day and despite the fact that we were on the road en route to Utah, it was a holiday and so the children asked "What are we doing for family fun today, mommy?”  SH*T! I didn't plan family fun, I barely remembered to pack all of us enough underwear for the trip.  All I have to say is Thank God for cell phones and Wal-Mart Supercenters.  We were in the middle of the Nevada desert and I had to come up with some kind of family fun craft about President’s Day.
Ok, I didn't HAVE to do anything, I'm the mom and if I say we don't do family fun we don't do family fun.  But, I have this d@mn bet with my friend Natalie, and also, I think I need to admit that "my name is mommy and I'm addicted to family fun too!"
Here’s what I learned about holiday family fun on the road:
1)      Do NOT ask your children who their favorite President is so that you can get ideas for what activities to do. . . invariably one of them will pull out of their @$& “John F. Kennedy”.  Of course the Ego (middle child) and the Id (the baby) said what they were supposed to (Washington and Lincoln respectively) but the Superego just HAD to pull out the one President where there are no known craft activities – of course later she reminded me that we could have done a space craft project!  D@mn, if only I'd thought of that while we were in Wal-Mart!
2)      When you decide to do a fingerprint art project to create a visual to tell the story of George Washington and the Cherry Tree, just don’t – the children will become big smeared messes and the baby will try to decorate herself and her sisters with “make-up” from the stamp pad!  On a side note, who knew that George Washington’s father had such great taste and loved a Cherry Tree?!  Man after my own heart!!!  Also, who knew that according to historians that whole story is probably a bunch of B.S.  Well, I for one am going to perpetuate the lie because it’s about cherries! 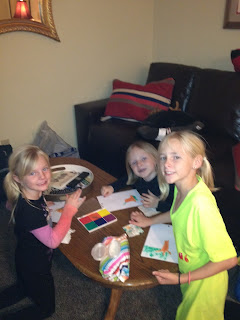 3)      When your Abraham Lincoln project is a log cabin made from frosting, pretzels and a buttermilk carton, make sure that your fourth child (aka daddy) doesn’t get a hold of the frosting tube after you’re done.  He squirted it into his mouth and then opened the flood gates for the children to come to him like little baby birds waiting to be fed! 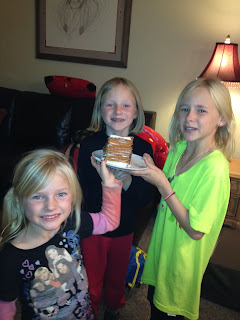 4)      If you can’t find anything better to do on the fly for the JFK project, you MIGHT want to pick something other than chocolate cheese.  I had read that chocolate was a favorite food of his and unfortunately I had no other grand ideas.  So, I pulled out a package of Trader Joe’s Chocolate Cheese.  I thought this was brilliant – it sounded disgusting, but someone had recommended it so I thought I should use my children as the guinea pigs to see how it tastes.  Lets just say that you should NEVER EVER use your children as a guinea pig for something like this.  In my opinion it was as gross as it sounds and the only thing that made it better was to put it with some of daddy’s smoked cheddar cheese.  Well, 2 out of 3 experiments working out isn’t bad!! 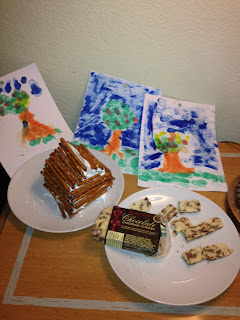 Recommendations for today:
Go to www.dltk-kids.com/crafts.presidents.html.  They had some great recommendations for President’s Day crafts for kids.  Both these ideas took 15 minutes each to implement and the kids loved it.  It also gave us a chance to talk about the Presidents and why they were getting the day off from school.
Cherry Tree Fingerprint suppliesPiece of white paper
Red, Green and Brown stamp pads
Your kids fingers and imaginations